Let's talk steering wheels.  Although I have not really had the chance to pilot the Cherup on open waters, I have had my hands on the steering wheel.  It is not in the best shape.  The deteriorated condition of the wheel is hidden by a not so great wrapping of brown electrical tape. Nice!


I did some image searches for a 1924 steering wheel, thinking that if Wise Boat and Bus Works built both boats and buses that they probably got the steering wheel from an automobile. Right?  Well, nothing really mathced.

While I was working on the Chase post, I noticed in the picture that the wheel looked different, so did the dash.


In my email exchanges with Tom Coen, I mentioned this subject to him. As always, he has the timeline on the  installation of the existing steering wheel and some new pictures!  Tom writes:

I have been doing a lot of thinking about the steering wheels. I am sending two pictures from B&W negatives that I just had transferred to a DVD and I have never seen before.  The first shows a black steering wheel very much like the one on the other Wise boat. I never saw this one.  The  picture also shows fluffy cotton tuffs on the mattress and there appears to be a map attached to the dashboard but I cannot read it even if I make it larger.

The wheel that I remember was I believe a Bakelite or a similar product, a rather translucent tan color and shinny as shown in picture two.

That deteriorated and my father used plastic wood to reconstruct the wheel shown in a picture which I sent earlier that was painted red. 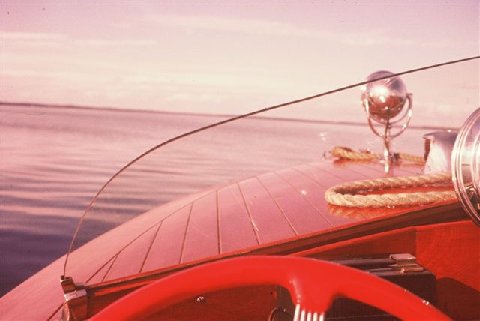 I have no idea why the first wheel was replaced. It appears that the throttle and choke are original.


So what do you think.  Should I refurbish the existing mid forties steering wheel or seek out and find an early to mid twenties black tri-spoke wheel that goes with the original set up?
Posted by Wise Boater at 10:29 AM