This is a interesting picture that hangs in a bar in the Hubert H Humphrey Terminal in Minneapolis.  According to Tom Coen, who supplied this picture, the ad is from a 1908 phone book. 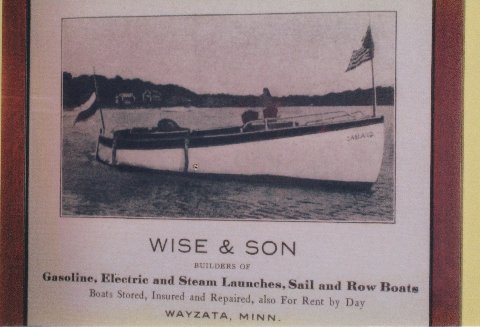 Posted by Wise Boater at 8:43 AM No comments:

As winter cruises along and the holidays come and go, there really is no time to work on the Cherup.  While there seems to be no tangible progress being made on restoring her, there has been progress made on forging a new relationship that is reaping priceless amounts of intangible information that will surely help in bringing Cherup back to her former glory!

I continue to talk to Todd Warner when ever I have a questions about wood boats.  During one of our conversations, Todd told me that he had been contacted by a former owner of the Cherup and he wanted to know if we could correspond.  Email is great!   Tom Coen of Kansas City and I have been writing back and forth, me...asking questions, he...telling stories, we...glowing about our mutual love for an old wood boat and creating a bond between the past, the present and the future.  I can't decide if I am having more fun finding out about my new boat or if he is, telling me about his old boat!

The following stories and pictures are excepts from the email conversations that Tom and I have had over the past month or so:


Purchased by my Grandfather about 1929 as I was told, my father was the primary caregiver for the boat but I helped a lot along the way.  I have lots of pictures and some movies that I would love to share. I was transported in the boat in 1939 when I was not yet 1 year old. I just turned 72 in November. It also survived a tornado in 1939. I know every inch of this boat. In regard to the engine, I watched it being installed at about the age of ten.  The old Scripps was very hard to start.  The only thing major we did to the engine was to have the valves ground.
We never ran it "wide open" at our summer cottage at Star Island, Cass Lake, MN.  It has a great sound!  I remember going to junk yards with my Father to find the iron fittings for the exhaust pipe.  It served us very well until about 1966. I do not know how it was treated when it left us but I think it could be restored.  Gray Marine Phantom Six. The engine manual was in the side pocket when it left us. This is so perfect for the boat to return to your family.
I went to the boat auction on Friday October 15th, to see the boat and brought along my daughter Hanna, who had never seen the boat, and my grandson Ted. 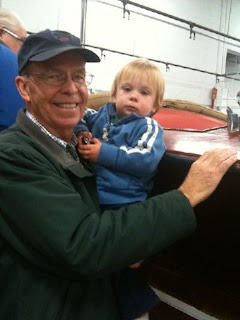 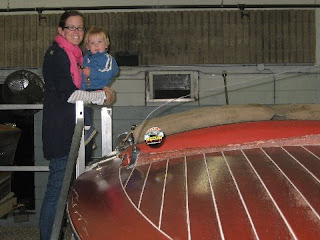 It was an emotional goodbye when we left that afternoon.

We still go to northern MN where I have The Roamer, a 33 foot boat, the "other Dingle" which has been a big part of my life for 50 years. It is just amazing to think that Mr. Dingle and Mr. Wise probably knew each other and here we have best of friends, side by side, dock mates, the two "Queens of Cass Lake" the Roamer and the Cherup.


Chris, there is so much I would like to tell you.  The electrical system was always 6 volt when we had it.  We never had a bilge pump as we used the nob under the driver seat to open the valve in the back of the bilge. The nob was a check in case something got under the flap of the drain valve. Water pressure held the flap closed 99% of the time.  We used the boat almost daily for the months of July and August and it never leaked very much. The ride is superb!  With the deep "V" it was great.  Cass Lake is the 6th largest lake in MN and we can get some pretty big waves. I remember the Scripps engine as being 115 hp.
Today's picture treat! One of my favorites.  Love the red steering wheel.
The metal plate was to cover up the hole where the double spotlights were removed after it left our ownership. I do not think my family added the lights. They did work and were very bright. But, they are not in the Col.Chase pictures that you sent. Sounds like something Chase would have added. They raised up above the windshield and the shaft went to the floor. It got in our way so we cut the lower part off which accounts for the small piece of gray linoleum on the sloping floor.  I installed that linoleum front and back.  That was a radio on the dash. Never had a key. The black button on the right was the ignition.This picture also shows the green color of the bottom that my father used although I remember seeing a darker green color as probably the original color.
Chris, there are two items that are not original but they are about as old as I am.  You mentioned your children. The folding seat in the front was made by my father.  I remember fighting with my brother to sit there very comfortably. 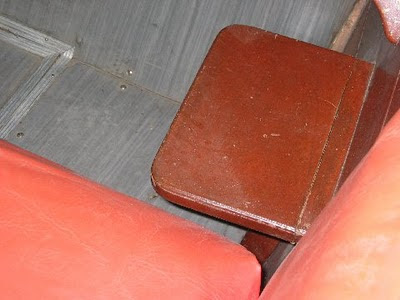 Also, the life preserver cabinets in the back cockpit that were made by my father.  There used to be metal liners inside.  They have held up pretty well. 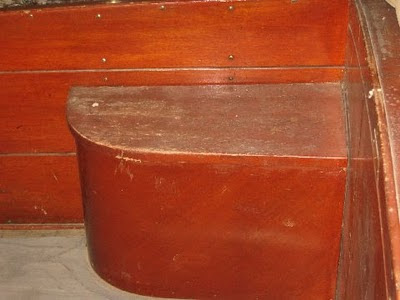 Additionally, the mahogany strips around the upholstery were made by my father, replacing a narrow aluminum strip with a narrow red insert of the red upholstery material.  He also made the step pads. The stern flagpole is longer in the original pictures.  My father shortened it as he thought it was too long. It looks like the same plastic lens that I adapted from a screw in lens. I attached the spring around the port and starboard light to keep the flag pole in place. 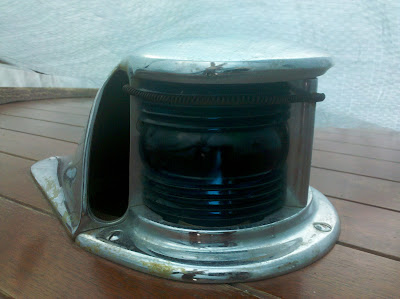 I put the horn on the boat.  Bought it at a junk yard in Cass Lake. 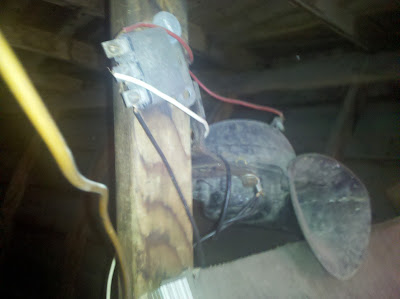 First owner, Col. Chase, second owner my grandfather Wilbur F. Coen, Sr. (1929). In 1966, we donated the boat to Unistar, a Unitarian Church camp on Star Island, where we have been summer residents since 1912. The church camp had been given by the Anderson family (M.D.Anderson cancer hospital in Houston) they (Unistar) used it for 2 or 3 years. My cousin Lawrence Coen, now deceased, bought it and held it for 2 or 3 years. Then it was purchased by a professor at Bemidji State University, Bemidji, MN by the name of Charlie.... for 2 or 3 years. Then Sailstar Marina (who may have acquired it for back storage) owner Connie Larson sold it to Todd in 1978, I think.
Connie Larson and his father Arnold Larson operated Cass Lake Boats and could do anything with wood.  Arnold reluctantly came over to Star Island to help my father install the present transom board and portions of the keel were replaced. I helped pour hot water on the transom board to bend it and often wondered if it would last, but it looks to be in good shape. That board stuck out from the very beginning, it has not moved in all these years! 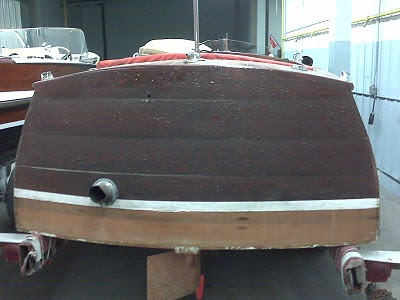 
Stay tuned...Tom has already sent me more pictures that date back to 1939 that show his Mom and Dad with some friends on Cass Lake.  Black and White!
Posted by Wise Boater at 9:02 AM No comments:

I had known for years that The "Cherup" existed.  Grandpa Robert had been offered the boat by Todd Warner around 1985.  In the back of my mind, I was always, one of these days.......

When word got out that Todd was auctioning off some boats, I got a look at the list.  Low and behold,  Todd didn't have one Wise boat, he had two!  It is exciting to know that there are two examples of Wise boats still in existence.

When we went to Winsted to pick up the Cherup, we were given a chance to look around the warehouse.  Much to my surprise, the1920 Wise & Sons 20' Launch was still there.  While in very rough shape, it is still in restore-able condition.  Not a project for the meek at heart!


So with out any more to-do, here are the pictures of the "other" Wise boat. 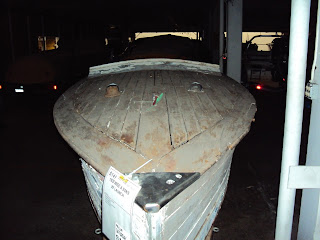 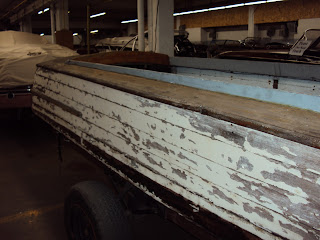 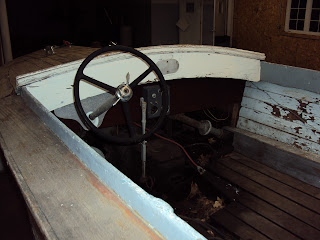 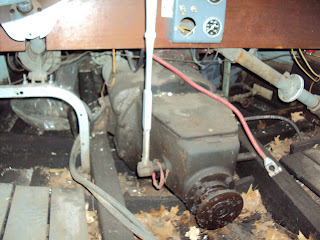 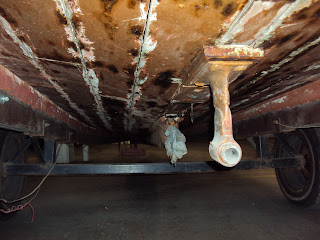 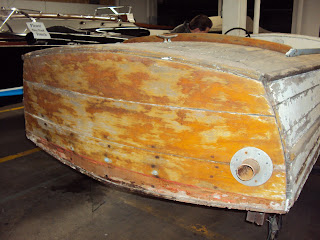 Posted by Wise Boater at 9:54 PM No comments: